They came from many different segments of the Madison area, from different generations, from different geographic places, most of them white, all of them interested in rooting themselves in a view of history that could help explain the present and change the future. 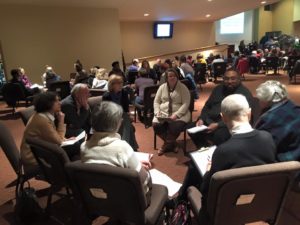 About 150 people gathered each week during the Spring of 2016 at Fountain of Life Church in Madison for an eight-week class called “Black History for a New Day- Allies for a Stronger Madison.”  Now, several months later, what impact has it had on them?

“I am more and more sensitized to the unconscious bias that surrounds us in every day interactions,” said Andrea Dearlove, “including perspectives I see on the news, Facebook comments, conversations I have with co-workers.  And more importantly, I now have tools to not just see the bias, but to talk about it in a more informed way.”

That was a common theme.

Dr. Marc Hansen, a retired physician and professor who attended the class, wrote, “I have made an explicit effort to make people aware of their role in the problems and their solution.  I have introduced discussion of ‘white privilege’ in several men’s groups that I am apart of.   The idea was greeted with the expected reactions … ‘I’m not a racist’ … ‘I’ve had to work for everything that I have.’ … ‘my great grandparents were immigrants after slavery ended, and earned their place by hard work’.   I expect that I will continue this work, and try to enlarge the circle of discussion.”

Jean Haughwout said that the class “provided me with an intelligent and fact-filled scaffold on which to hang many of my more emotional responses to this issue.  I feel that I can own my own white privilege now and my white fragility such that I can more effectively engage in the hard work that is to be done.” 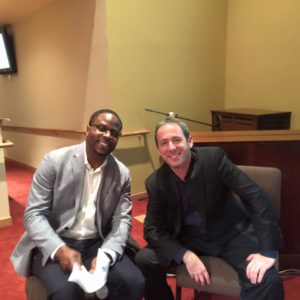 The class, taught by a variety of people from professors at UW-Madison and Edgewood to activists and community leaders like Rev. Alex Gee and Percy Brown Jr., explored the historical roots of many of the issues this nation faces today.  Professor Steve Kantrowitz of the UW-Madison Department of History developed and delivered much of the curriculum and Groundwork helped facilitate discussion groups.
There was a look at how slavery became the crucible for a culture of creativity and resistance. It delved into how African Americans helped end slavery and invent interracial democracy. Then it examined the Jim Crow era of the past and the present. And it pondered how the Civil Rights movement reshaped American life – and the ways it did not bring about the transformation it had hoped for.

Dr. Marc Hansen said there was not a lot of “new things” he learned “but the experience consolidated my understanding. It was particularly important to have the historical facts of slavery, Jim Crow, the ‘war on drugs’ and the very disproportionate incarceration of the young African-American males presented by and with the people who have been directly affected… I think that many were actually surprised by the breath and depth of the problems that undergird white privilege, and it’s poisonous effect on our past and present.”

Marian Fredal picked up that theme.  “This was a fabulous way for me as a white person to follow the leadership of black people (people of color) given how unusual this is in the United States, and especially in Madison,” she said.

Andrea Dearlove talked about the experiences in the class have stayed with her: “I think about class all of the time.  Lessons learned or personal stories shared or conversations — they come back to me all the time on any given day and remind me how vital this work is and how many people need to be engaged and better informed in order to have the necessary and often uncomfortable conversations that we have to have more often to move forward.”
Rick Orton has been teaching a class on racial justice and inequality for the organization known as PLATO that provides learning opportunities for older adults through the University of Wisconsin-Madison’s Department of Continuing Education.

He said he was propelled to act after the death of Tony Robinson, who was shot by a Madison police officer in March of 2015.  It was an “all-hands-on-deck moment for him,” so he created his course and then took the Justified Anger course to deepen his knowledge.

Rick Orton said he hoped that as these JA courses continue, there will be efforts to connect with churches and other groups to provide follow up for those who attend the classes.

Ideas for follow-up were abundant at the end of the course. There were about 90 suggestions ranging from doing more reading on the topics to sharing lessons with friends and family to getting involved in a wide variety of community efforts.

Check out our Course page for the latest offering.