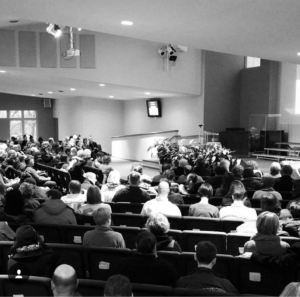 It’s relatively easy to sit in a large room with 250 folks – most of us white – and listen to the stories of slavery and segregation and civil rights and to feel horrified and then ashamed and then inspired.
It’s not so easy when all that history bumps up against today’s realities.
There were powerful lectures at Justified Anger’s Black History for a New Day series, lectures about the origins of the slave trade, the brutality of lynchings, the codified norms that limited opportunities for black people in this country.
Prof. Alexando Shashko of the UW’s Department of Afro-American Studies led off each of his three lectures with a reference to the nostalgia that shapes our perceptions. It’s a nostalgia that can cut both ways.
He showed images from the Andy Griffith Show, Happy Days and American Graffiti, each hearkening back to a seemingly simpler time when the American story was told through the eyes of white people. But he reminded the group that there is also a nostalgia attached to the great days of the Civil Rights movement, the 1963 March on Washington, the speeches of Dr. Martin Luther King, Jr.

Then as we broke into discussion groups, we were confronted with one of several jarring elements about life right now in Madison.
There was a picture of a poster in five Madison bars laying out a dress code that was clearly directed at African-Americans. It is part of an on-going debate in Madison about how to create spaces for things like hip-hop and other cultural spaces sought by African-Americans while not overlooking the havoc caused by a few young people who show up at those scenes.

For some in the discussion groups, the need to have safety in public places seemed the bigger concern. For others, the clearly discriminatory message in the posters was a vivid reminder that deep racial divides remain.  (Side note – the Madison City Council has set up a Task Force on Equity in Music and Entertainment that is exploring these issues over the coming year. Also, Karen Reece of Justified Anger is a leader in the Urban Community Arts Network that is working on these issues.)

But that is just one example of the contemporary challenges facing white and black Americans. Rev. Alex Gee, the leader of the Justified Anger project, began each session with some personal stories of racism has affected him and his family. At one of the last sessions, he talked about the discouragement among black middle-class and professional folks in Madison who are thinking about moving to larger urban centers or to the South where they think there is a better cultural fit and greater personal prospects. He described it as emerging “black flight” from Madison.

Prof. Shashko talked about the “white flight” from Milwaukee following the open housing struggles in that city during the 1960s. As open housing laws took effect, whites moved in droves from the city to the suburbs, with the population of the suburban counties tripling from 1960 to 2010.

That brought back the images of the lynchings that spanned the first two-thirds of the 20th century where the victims were often the blacks who were becoming successful in Southern communities. In the North, as civil rights laws went into effect, whites avoided “getting too close” by moving to the suburbs.

Or, as Rev. Gee reminded the crowd, “the higher we seem to climb in the community, the more we become a threat to the status quo. There is a cost to pushing the system.”

Yet music became a way that black culture became an integral part of white life, even as blacks found ways to encode their own realities into the mainstream, much as they had done with the spirituals of slave times. Even as it did that, it moved to the center of American popular culture.

Shashko offered a fascinating comparison of music with European roots and that with African roots. Consider these elements:

Swirling through all of this – the history that divided people by race, that allowed whites to prosper at the expense of blacks, the viciousness that arose as blacks sought to claim their place in the country – are the stories of people who struggled to change the reality.

Yet, as we learned in the past and were reminded again by Dr. Shashko, Milwaukee today is the most segregated city in the nations, Madison has the sharpest racial disparities in the nation, and for whites in either city, it is far too easy to look past those harsh realities.