It’s a family whose life in Madison stretches across five generations, across almost a century.

It’s a family whose work has touched health care and business, education and public safety, church and culture.

It’s a family whose matriarch came to Madison and did domestic work and who saw each succeeding generation reach wider and higher to shape the life of the community. 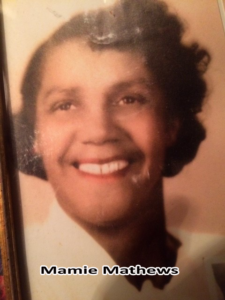 Mamie Matthews came to Madison from Mississippi in the mid-1920s and eventually worked as a domestic for the vice president of the bus company.

One of her 10 children was Addrena Squires, born here in 1927 at what was then Madison General Hospital. In time, Addrena gave birth in 1951 to Mona Adams, among other children. Mona, in turn gave birth to Johnny Winston, Jr. in 1968. And now Johnny Jr. has four kids of his own – two grown, two in Madison public schools.
There were other children in each generation, of course, but these stories of one family tell how this family shaped Madison and how Madison was shaped by them. 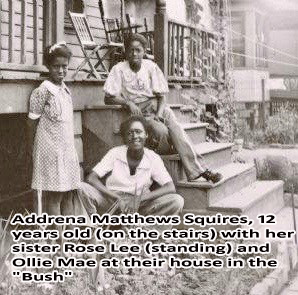 When Mamie Matthews arrived Madison is the mid-1920s with her five older children, she was one of fewer that 300 blacks living in the city at that time. The KKK was making a visible presence of itself here in the mid-1920s. Half of her children had been in Mississippi and the next five were born here.

One of them, Addrena, went to Longfellow Elementary School, Central High and then the Wisconsin School of Music. She grew up in the area knows as Greenbush or “The Bush” between Park and West Washington, a place where friends from a variety of backgrounds moved easily between each others homes, as Mona heard the stories from her mother. She worked as a nurse at University Hospital and achieved recognition as a soloist giving recitals. She filled many roles at Mt. Zion Baptist Church.

Her daughter, Mona, recalls going to those recitals when she was a kid. Mona attended Franklin Elementary School, went to St. Benedict Academy (now Holy Wisdom Monastery) for her freshman year of high school, then after it closed, attended Central High.

Mona said even though blacks were a decided minority in Madison at that time – and battles over open housing were raging in the City Council – she had friends all over the city and her friends included a woman of Norwegian heritage as well as Pia Kinney James, who would become the first black woman on the Madison police force. 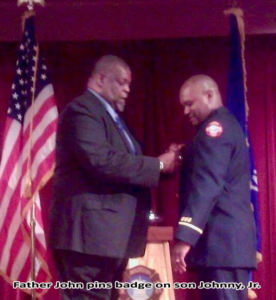 And it was Mona’s husband, John, who first broke the color barrier on the Madison police force, becoming a police officer in 1969. Twenty-nine years later, he would retire as a lieutenant and had served as a recruiter and mentor for a generation of black officers on the force, including Mona’s friend, Pia, and Noble Wray, who one day would become chief of police in Madison.

Johnny Jr. remembers the phone often ringing at their house, black cops stopping by as his dad ran an informal support network, “helping them work through challenges.”

An article in UMOJA in 1998 when he was retiring from the force described John as “an officer who cared about village…(who has) given so much back to the village as a community leader…(and who was) outspoken on issues that affect his community and his profession.” He was also involved in numerous community organizations.

John first came to Madison from South Bend to serve at Truax Field in the Air Force. He was attracted here in part by a postcard that showed the Capitol and the lakes, an appealing site for a guy who liked to fish, said his son, Johnny Jr..

When John was courting Mona, he was sitting with her on the deck of her family home on Lake Shore Court overlooking Lake Monona and asked if people took pictures from there. She told him that on occasion, photographers would stop by. He was pretty sure that postcard picture was from this vantage point.

In time, they had three sons – and 22 foster kids.  That all started when a friend of Johnny Jr. came to their house after school and wanted to wait for John to get home from work to tell him about what she was experiencing at her home. A few months later she was in the foster care system and Mona and John got licensed to be foster parents.

“We were really lucky to have all of them,” Mona said. They are still part of the great extended Winston family. In time, the family spread out and John and Mona divorced, but, as she noted, they have remained friends. 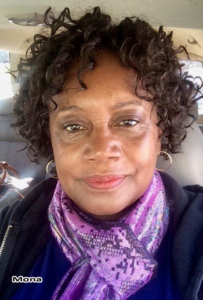 Mona was doing more than raising kids. She worked for 31 years for AT&T as a business service representative, took classes in communications, political science and African studies at UW and also classes at Rust College, a historically black college in Mississippi.

She led the city of Madison’s Study Circles project in early 2000 to break down some of the racial divides in the city. She served as manager at the New Loft Teen Center, as an assistant to the president of the Urban League for fundraising and worked at Second Harvest, seeking to ameliorate issues of hunger.

Along the way, she teamed up with some other powerful women and founded the Juneteenth celebrations in Madison – an annual tradition for the last 25 years. That led to a spot on the national Juneteenth board of directors, which appreciated the way the Madison celebration welcomed people from all walks of life while instilling a sense of pride in the black community here. She also helped organize the city and county’s annual Martin Luther King, Jr. celebration. 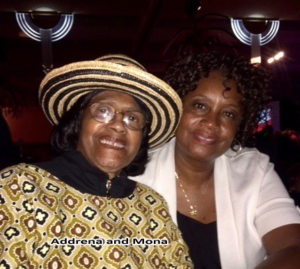 But there’s more. Mona served on the Monona Terrace Board from 1997 to 2013, including a stint as chair. And she also served on the Madison Symphony Orchestra Board for while, much to her amazement. “How far from the South Side can you get?” she asked.

And yet that’s precisely how the role of this extraordinary family kept reaching out to help transform the whole community in Madison.
That’s been Johnny Jr.’s story as well. He is now a division chief in the Madison Fire Department, but that is just the latest way he has served the community.

Not that it all started out that way. Johnny Jr. remembers when he was a freshman at West High sitting in the cafeteria, cutting classes, when a black senior girl approached him and told him he had better get back to class. He tried to ignore her, but she was persistent. “She chased me up three flights of stairs to class,” he said with a chuckle. “Upper classmen looked out for freshmen. That was a defining moment for me – somebody caring enough about me to chase me up to class.”

That persistent senior is still making sure kids get an education. She is now the principal of James C. Wright Middle School – Angelina Crawford.

Johnny Jr. devoted his early adult years to working with youth, drawing on the inspiration he received from many of his teachers and coaches in school. He is surprised when he thinks back about how many black teachers he had and he is especially grateful in particular for the role Joe Thomas played as a mentor. He also recalled the wide range of friends he had growing up, something that he said allowed him to “function in different capacities,” adding that one message he has for kids today is to “get outside your circle.” 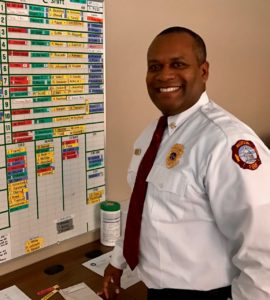 After working with a wide variety of youth programs in the city, Johnny Jr. started as a firefighter in Madison in 1996. At first, he said, he thought of it simply as a job. Soon, it became a career. As he moved up in the ranks, he did what his father had done before him – helping open up opportunities of other people of color and women.

He also got involved in public education, winning election for two terms to the Madison School Board from 2004 to 2010, including serving as president of the board for a year. “The schools were good to me and to my kids,” he said. “I wanted to give back.”

He still is in the schools a lot and he pointed out one difference from his days at West. In his days as a student, he said, “we had the ‘black table.’ Now kids of different colors and nationalities are all over the lunch room.”
And now another generation is carrying on the family traditions. One of his older daughters is a middle school counselor in Nashville. The other older one works in retail in Madison. His younger children are at Whitehorse Middle School and Kennedy Elementary.

He knows about the influence of family. “My parents are the reason I am in the position I’m in,” he said. “My parents shaped me to do these things.” 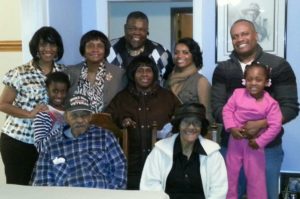 Their story and Madison’s story are intertwined. They are an essential part of the history not only of the black community in Madison, but of the whole community.