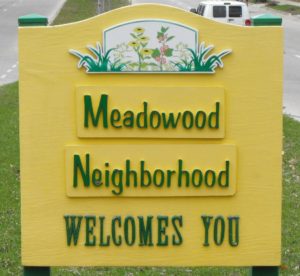 Finding the adults in the neighborhood who are trying to keep peace on the streets and then offering them support in their efforts.

Helping a group of black women in the neighborhood and a group of white women at a church in the area figure out how to get to know each other through a common project.
Sitting at a table during a community dinner at the Meadowood Neighborhood Center and just chatting with folks.

Jackie Hunt has been the person on the job in Meadowood for Justified Anger as it tries to help grass roots leaders in the area get the coaching and training they need to be even more effective than they are now. This is one of the early projects of the Justified Anger movement, a place where the leaders of the movement are learning about both the possibilities and the pitfalls of working in a neighborhood.

The possibilities exist in walking alongside the grassroots leader as Jackie has been doing over the past several months. “I help them do what they do,” Jackie said.

The pitfalls come in navigating the complex web of relationships that exist in any community. “I try to be really careful about where I step,” explained Jackie.

She tries not to be too visible herself, not to threaten existing efforts, but rather to be with folks and give them support in their efforts. 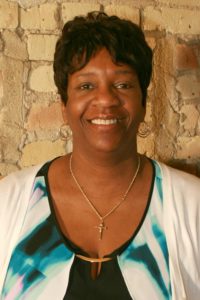 Sometimes she can play the role of mediator when there are conflicts between those trying to help the community. Other times she can help people open doors for ideas that they have.

She talks about a woman like Judy Hayes, who created Moms on a Mission. These women walk through the neighborhoods looking for teens who are just hanging out and try to steer them away from trouble. She coached Judy on her leadership of MOM, and has she offered to do the same for other organizations in the neighborhood.

Jackie brings to the neighborhood a wealth of experience – life experience as well as professional experience and a wide array of contacts throughout the Madison area. She is a professional counselor and substance abuse counselor who has worked for Journey Mental Health and now for the Anesis Center for Marriage and Family Therapy. She is a mom herself and, as she says, “I have a past life and a restored life, so when I am in the community, I am them and they are me.”

She works with people in conventional institutions – the neighborhood center, the schools, the library, the churches – and uses those connections to help strengthen the work of unconventional grass roots leaders.

The idea is not for Justified Anger to start programs but to help enhance the programs that exist or to create pilot projects that others can sustain if they seem valuable. 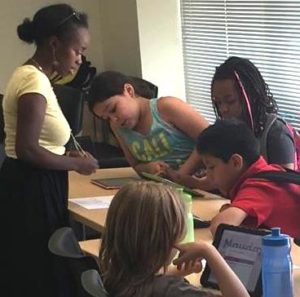 For instance, during the summer, Patrick Yates, the director of program growth and community engagement for Justified Anger, helped arrange a class at the Meadowood Neighborhood Center through Maydm, a local organization that introduces young people to computer coding. Some 30 kids participated with much enthusiasm. So now Patrick is looking for a business that might take over sponsoring and sustaining the idea.

“We are trying to marry a need to a resource,” Patrick said. “JA can do a pilot, but we need larger, long-term partners to really make an impact in the community.”
That’s the thing about the work Jackie and Patrick are doing in Meadowood. It is about networking and identifying resources and connecting people both within the neighborhood and in the wider community.

Connecting starts with little things. It can have big results.