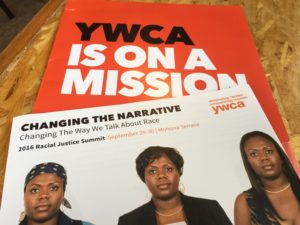 When Patrick Yates and Karen Reece joined some 600 people at the YWCA’s Racial Justice Summit at the end of September, they were making one of those connections that help Justified Anger work with the wider community to move the needle on the racial disparities in the Madison area.

Yates is the Director of Program Growth and Community Engagement for JA and Reece is the Director of Research and Program Evaluation for Nehemiah and Justified Anger. They were both presenters at the Racial Justice Summit, but they also left the summit with new ideas to bring to JA and its programs.

The theme of the conference was “Changing the Narrative.” As Reece said, “That’s what we are trying to do at JA,” to help people think about issues of race in fresh and constructive and deeper ways.

Reece was particularly struck by a point in the presentation by Vernā Myers, lawyer, entrepreneur, author and cultural innovator. Myers talked about how the Golden Rule – do unto others as you would have them do unto you – does not always work because what you want may not be what someone else wants. Sometimes, Reece recalled from Myers’ talk, you need to be looking at things through a different lens.

One story that stuck with Reece involved Myers being in China and feeling offended that people were staring at her and pointing at her – until a friend helped her understand that in China, pointing was acceptable, not rude, and that she looked so different from the people they normally saw that the Chinese were interested in who she was.

Yates gave a talk about how to effect change from where you are, how to turn a negative into a positive. Then he was at a breakout session where he got to be part of creating a diversity timeline – when did you have experiences that helped you understand race? He recalled when he had his first white friend, when he saw his sister in a high school play kiss a white boy. What struck Yates was how many instances he could identify – and how much harder it was for white people in the room to come up with examples.

In other workshops, they worked with negative stereotypes of black men, how to deal with racist comments in the workplace or with friends, a wide array of situations where people’s actions can change the racial dynamics.

Reece said this matters to the efforts in the Justified Anger program because as Rinku Sen, President and Executive Director of Race Forward, pointed out “now is the time – if we don’t act to make changes, we are going to have to wait another two generations for the opportunity to come back around.”

Conferences like the YWCA Racial Justice Summit are one more place where JA can build on the momentum in the community to do something different. Or, as Yates put it, “be the change agent in your organization.” 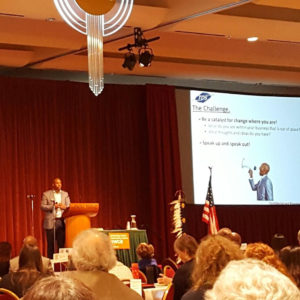 Patrick Yates at the Opening Plenary 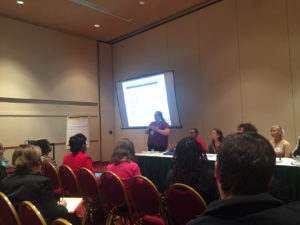