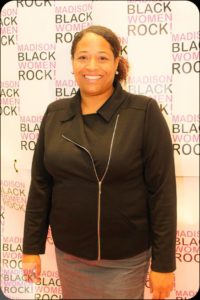 If you are going to have a conversation with Shahanna McKinney-Baldon about student achievement, you will learn quickly that simple words and simple answers will not get our schools very far in helping students achieve their highest potential.

McKinney-Baldon is no stranger to these conversations. She is currently the director of professional learning for the Minority Student Achievement Network (MSAN) at the UW Wisconsin Center for Education Research.

She brings to that a background experience as a classroom teacher for 15 years in the Milwaukee Public Schools and administrative positions in a range of educational settings, including serving as chief diversity officer and director of family and community engagement for the Madison Metropolitan School District.

She speaks with passion about the shortcomings of high-stakes testing, about the complications of discipline, and about the research on creating conditions for students of color to succeed in school.

At the root of it all, though, McKinney-Baldon argues, is power.
“The way to transform the narrative is authentically sharing power,” she says.

It is power that determines which tests will be given for what purposes.

Here’s an example. Wisconsin’s gifted education law mandates that schools identify and serve every student who shows that they may have high abilities in any of five areas: general intellectual ability, specific academic areas, leadership, creativity, and fine arts. The aim of the way the law is written is to get more students into gifted programs. There’s even a provision in the law for parent voice, and for ensuring that the measures used to identify students do not contain cultural or language bias.
“Where is the accountability around this unfunded mandate from the state?” asked McKinney-Baldon. “And what power must be shared in order to make sure that DPI is holding schools accountable around this law? Because what we see now is mostly business as usual—schools doing gifted education the same old way, with the same population of students. It’s only when there’s a sense of urgency that comes from without—community advocacy, or special funding – that we see innovation and increased racial equity in gifted programs. And the flip side of this is, of course, the conversation about overidentification of children of color and poor children for special education programs.”

Measuring schools often gets defined as looking at test results. McKinney-Baldon is quick to point out the implicit biases and assumptions that affect student performance on tests, including asking students to take tests that are not offered in their first language, or their first dialect – so that tests very often is simply an indicator for language, and not the subject matter, such as math or science, that the test is supposed to measure.

There is research, she says, on broader and more subtle measures that can ensure that students are learning what they need to be successful in adult society, but restructuring schools around those goals can only happen if the public is sharing power, not only with personnel in schools, but with politicians at the local, state, and national levels.

For example, there is research on the positive effects, for all students, of hiring diverse teachers and offering diverse curriculum and cultural programming that allow all students to “see themselves” in their educational experience. But school districts, she says, and politicians who play such a large role in dictating educational policy, often don’t have a sense of urgency around these issues – unless families and communities push them to do so.

Similarly, in the debates about discipline, there is plenty of evidence that school discipline policies are an area where inequities “live.” And, in McKinney-Baldon’s words, “when power is authentically shared with parents and community members, ideas of what we mean by ‘effective discipline’ can really transform.”

In fact, much of the movement around overhauling school discipline rules, or “codes of conduct,” was spearheaded by immigrant rights groups in California. Families and community members demanded change as they became more and more sure that school discipline policies were the main area where children from immigrant families faced discrimination.

As this movement has grown and gained momentum, school discipline codes have been changing around the country – including here in Madison schools, where the code of conduct has been updated, and school discipline is augmented with funding for restorative justice programs, and practices that explicitly teach children what behaviors are expected for all students  – while acknowledging that children do misbehave.
McKinney-Baldon’s organization, MSAN, is a national coalition of about two dozen multiracial, suburban-urban school districts that use action research, policy analysis, and professional learning to understand and eliminate racial achievement and opportunity gaps that persist in schools. She’s shared some ideas, from the “front lines” of equity work in schools around the country, for how folks in the Justified Anger movement can engage in these issues. (See “What You Can Do,” below.)

While strategies like tutoring a student can be extremely helpful, McKinney-Baldon says, these actions must be paired with advocacy that focuses and sharing power and changing systems and naming and eliminating the effects of institutional racism, and other forms of oppression, in schools.

There are no simple words or simple answers – only a lot of hard work!

What You Can Do