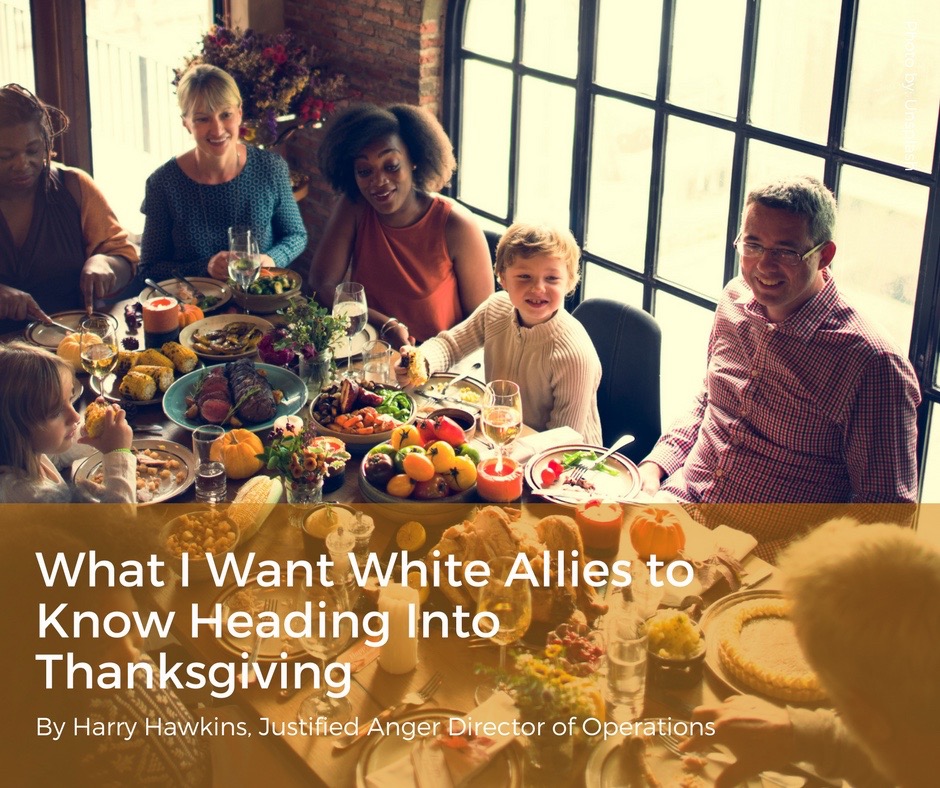 As we approach Thanksgiving, I can’t help but think of family and what this time of year means to me. It’s a time to gather with friends and family, share some fantastic food and laughs. Since moving to Wisconsin five years ago, it took on another meaning as well. As a black male, it became a time to heal, a time for love to lick my wounds from battling a hostile culture, living in an area where polite racism has remained unchallenged for decades. Maybe centuries?

I recently watched a documentary on the Ku Klux Klan on Netflix and experienced a gamut of emotions as I did so. In the end, I felt pity. Pity for people who are so unattached to their own worth that they spout false history and propaganda to feel better about themselves. They fight an unwinnable battle with an enemy that lies within. Traveling to Georgia by car many holidays, I ride through states where the Klan is active. That might seem like a scary ordeal for a black man, but not as frightening as the reality I leave behind.

Watching people burn crosses reminds me of the history of the terrorist tactics that many white supremacist groups have used over the years. Fear, intimidation, threats, and violence, well documented throughout our history in the United States and often ignored or dismissed. I wasn’t afraid of them as a threat while I watched the documentary because I reasoned that the country was different today. People wouldn’t stand for that sort of open violence against US citizens, right?

Then I woke up. It was a beautiful dream, but the reality we face (and I mean we, as in all of the United States, not just the brown-skinned people) is that the white supremacist groups have never been the real threat. The majority of the people in the South never attended a lynching. A majority of the people in the US never owned slaves. Most white people today have never shot a black man or raped a black woman. But the real threat was and remains the silent white majority. Crimes went unpunished because the majority of white people didn’t speak up when they saw evil happening around them. They turned a deaf ear and a blind eye to the suffering of others, and the lawless were allowed to thrive. Then, the criminals created laws that legitimized the wrongs, allowing good people to hide behind the laws and shy away from blame.

So, I will wonder as I eat Thanksgiving dinner with my family, how many “supporters” of justice will sit quietly while another racist joke is told at the table. I will wonder how many silent moments will add up as people remain quiet when they hear a man disparaging women, or the homeless, or anyone considered “other.” I will wonder this: if I were to be assaulted on my way to Georgia this year, how many white people in Madison would find a way to blame me for the incident? I wonder how bad things have to get before people are willing to put skin in the game? I wonder what it takes to wake the silent majority up from its nap? Do you really need a black friend to understand that the KKK is a terrorist group? Do you?

I’m by no means dismissing the great work that so many people do, white or otherwise. I’m simply refusing to allow people the comfort of attending rallies, but not confronting the people around them. I’m refusing to allow people to donate money, but never speak up against hostile work environments. I’m simply removing the barrier that many people want to keep in place so their homes, jobs, and churches can be “safe.” Safe spaces for sensitive constitutions burned with a cross as a hooded figure watched them both go up in smoke. And we should all be thankful for that!

Harry Hawkins is the Director of Justified Anger in Madison, Wisconsin.

This is part one of a two part series addressing speaking with families during the holidays when situations that perpetuate or reflect racist ideologies or beliefs occur. Part two will feature an article from white allies who share of their experiences, perspectives, and thoughts heading into these difficult conversations.